Theatre Onset will be having its AGM on Wednesday 14th November from 6:30pm at the Funhouse in Bega.  We would love you to come and share your thoughts, your ideas, your theatre wishes and your energy for Theatre Onset moving into the future.  We are always happy to welcome new people into the company and are always on the lookout for actors, directors, producers, stagehands – anyone who would like to get involved.  Theatre is a great place for forging new friendships.

We hope to bring you some exciting theatre in 2019 and this will be the place where we toss ideas around.

Food & drink will be available – TBC.  For now, if you are able to join us, just keep the date free in your diary!

OF MICE AND MEN TO PLAY IN BEGA

Theatre Onset is excited to present a production of  John Steinbeck’s classic story, Of Mice and Men to the people of the Bega Valley in May.  It is a play about mice and puppy dogs, dreams and hardship mateship and heavy burdens.  Set in the Great Depression in the US in the 1930s, we follow the poignant story of two very different men striving towards their shared dream.

Under the experienced direction of David Stocker, Theatre Onset has gathered a great cast for this production.  There are some experienced favourites with Jamie Forbes, John Fitzmaurice, Robert Buck and Indigo Walker.   Karl Auer comes to us from Pambula’s Footprint Theatre and James Cook is fresh from a successful cricket season.  There are a few exciting new faces in Ethan Dack, a Bega mechanic, Malcolm Oastler who used to manage a racing car team and Peter Byrne from Tanja who is a dry-stone waller who started his career in Cornwall.  To cap it all off, we have Warren Foster from Wallaga Lake who has made time for the play from his part in a zombie movie being filmed out west.

This is one of John Steinbeck’s few plays.  It is elegantly written and rightfully considered a classic.  Not to be missed.

Catch the production at the Funhouse in Bega on Friday 11 May and Saturday 12 May at 7:30pm, Sunday 13 May at 3pm then Thursday 17, Friday 18 and Saturday 19 May at 7:30pm and the final performance on Sunday 20 May at 3pm.  Tickets are $20/$15 conc and available through www.trybooking.com/UKZA.  Limited tickets will be available at the door.  Strongly not recommended for children under 15. First round of auditions have turned up some great young talent BUT, where are the oldies?

This show can’t go ahead without the commitment of a crew that could be part of a really inventive and colourful show.

People with imagination and skill to build a colourful set

If the timing of this show ( Nov Dec Jan  rehearsal, production) is a problem please indicate.

Theatre Onset in Bega is holding auditions and play readings for two plays to be performed in 2018:

1.       The first is for a play to be directed by Alex Nicol and performed in January 2018 (need to be available throughout November, December and January for rehearsal and performance). We are looking for a cast of 7.   Flora and Ulysses, adapted from the children’s book by Kate D’Camillo, is the unlikely tale of a squirrel sucked into a vacuum cleaner and who, as a result, has super powers. He gets his name from the enormous Ulysses 2000 X vacuum cleaner that sucked him up. Our super powered squirrel, like all good super heroes is strong and can fly but better yet, he writes poetry. He is adopted by Flora the ten year old daughter of a romance writing mother and a dithering father.

·         a cast of seven with some actors doubling in smaller roles

ii.      an actor capable of voicing Ulysses and manipulating a hand puppet.

iii.      A great character part for an older woman

iv.      two  roles for thirty/forty something women and

Anyone interested in performance, backstage or technical roles should come to the Funhouse in Bega on Sunday 22 October 2-5pm.  Actors interested in auditioning are invited to call Alex Nicol on 6492 2619 to arrange an appointment.

2.       The second is for the play,  Of Mice and Men by John Steinbeck, directed by David Stocker.  A play about hard decisions in a hard time, set in the Depression years.  Cast needed is for mainly males (piece workers on a barley farm).  This is a good play for new actors as there is a bunch of smallish parts.  A playreading will be held at the Funhouse on Sunday 5th November from 2pm at the Funhouse.  Please call David Stocker on 6492 6117 for further info, otherwise just turn up.  Set designers and builders also required. 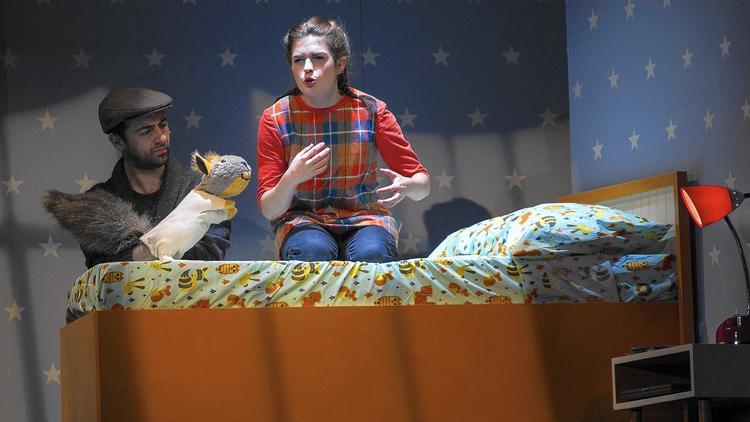 Bega’s Theatre Onset plans to add an extra dimension to the summer festivities on the coast. The company is currently in negotiation for the performance rights of Flora and Ulysses, the smash hit Kid’s show with plans for a January production. A successful bid would likely see the company stage the Australian premiere.

Company president, Rebecca Lupton, says that the show is an adaptation of the Newberry Medal prize winning children’s book by Kate D’Camillo.

‘Oregon Children’s Theatre commissioned John Glore for the adaptation and the result is a slick comic book show that has delighted the kids and entertained their parents. The show premiered in the US in February this year and a rash of productions by children’s theatre companies across the country have followed. If we can pull this off we’ll be staging the Australian premiere here in Bega in January.’

Flora and Ulysses is the unlikely tale of a squirrel sucked into a vacuum cleaner and who, as a result has super powers. He gets his name from the enormous Ulysses 2000 X vacuum cleaner that sucked him up. Our super powered squirrel, like all good super heroes is strong and can fly but better yet, he writes poetry. It’s not great poetry but then, he is a squirrel.

Adopted, by Flora the ten year old daughter of a romance writing mother and a dithering father, Ulysses brings estranged parents back together, cures a neighbour’s blindness and proves, as if it ever needed proving, that love conquers all.

‘Nothing about this show will be real. There are tremendous opportunities here for a whole range of talented people. Who is going to make our Ulysses for us? We’ll need costume makers for the bright simple costumes, carpenters for the comic-book cut out furniture and I’m planning a live orchestra, with a difference.

‘Read any comic book and you’ll know that every stumble, collision or fall is emphasised with a ’POW!”  BASH!’ ‘THOCK!’. There’s plenty of action in Flora and Ulysses and I want that punctuated by live sound effects. Here’s a chance for someone with imagination to come up with weird ways of making sounds and performing them live during the show.’

Flora and Ulysses requires a cast of seven with some actors doubling in smaller roles. Principal requirements are for two young people capable of playing ten year old Flora and eleven year old William Spiver and for an actor capable of voicing Ulysses and manipulating a hand puppet.

‘Ideally teenagers will fill the roles Flora and William with the ages of other cast members being flexible,’ says Nicol.

Theatre Onset is inviting anyone interested in the back stage, technical or performance roles in the show to meet at the Funhouse, the old video store, in Bega on Sunday 22 October between two and five pm.  Actors interested in auditioning are invited to call Alex Nicol on 64922619 to arrange an appointment.

‘We’re planning a January production for Flora and Ulysses, says Lupton, ‘and that will mean that cast and crew will need to be available throughout November, December and January for rehearsal and performance. A true ensemble production is the plan with the back stage crew, technicians and actors all being fully involved. It’s a great chance to show our summer visitors that the coast can offer more than surf, sand and fishing. This is a major production; time is of the essence if we are to succeed and enthusiasm for the production meeting on Sunday 22 October is the key.’