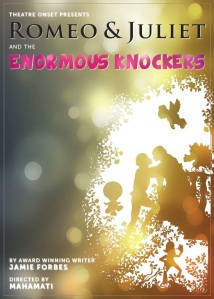 We’re SOOOOO excited! Television stations from all around the world want to talk about our little theatre company. Of course, as members of the Elizabeth Street Players, we’re delighted! It’s just what Theodore P. Davenport himself, founder of the Theodore P. Davenport Centre for the Performing Arts would have hoped for. Unfortunately, Stony Flat Bay, home to the TPDCPA as we like to call our little theatre, doesn’t show up on Google Earth, so no-one can find us.

Unless you count Emma Carlin, who’s starring with Rush Hailstone, Hollywood’s most eligible bachelor, in a world tour of Romeo and Juliet. Or Tully Tanner, their agent, and agent to half the Hollywood A List. Or Yuri. You know, Yuri Petrov…Yuri Petrov McConner, internationally renowned director? The one Earnest and Margaret have brought to Stony Flat Bay to direct Romeo and Juliet in the TPDCPA?

He was the start of it all.

Well, not him as much as the way that Steve, Steve Klein and the others reacted to the news. No. It wasn’t about his directing technique, though there are some difficulties with that. No. It was just…

Well, it’s a bit complicated, but if you come to see Theatre Onset’s production of Romeo and Juliet and the Enormous Knockers all will be revealed.

In a good way.